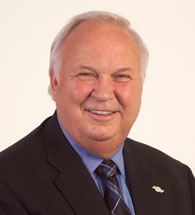 Glenn Ritchey has a long history of business achievement and community leadership in Volusia County, having served as City of Daytona Beach Mayor for six years.

Mr. Ritchey received his doctorate of business degree from Bethune-Cookman University and  is President and CEO of one of the nation’s most successful automobile organizations.  He has received numerous awards from General Motors during his tenure and served on the National General Motors Dealer Council, the GM Motors Southeast Regional Council, the Florida Automobile Dealers Association, the Chevrolet National Dealer Council, and the GMAC Dealer Advisory Board.

Mr. Ritchey’s community service, includes, the Daytona Beach Visioning Steering Committee, Economic Development Board, Board of Adjustments, Charter Review Committee.  He is an active member of the Civic League of Halifax Area, Halifax Area Chamber of Commerce, United Way, Rotary and a host of other worthy community causes.  An advocate for education, Mr. Ritchey serves on the Board of Trustees and Facilities & Capital Planning and Finance Committee of Embry Riddle Aeronautical University.  He and his wife, Connie, were recipients of the first Council on Aging Community Service Award that now bears their names.