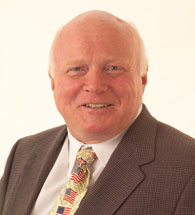 Bill Griffin is Director for Strategic Planning at Halifax Health.  He has been a member of the Halifax Health executive team since 1982.  Prior to joining Halifax Health Medical Center, he was a hospital management consultant with Ernst & Young.

Bill has a history of service, involvement and community leadership. He is a member of the Daytona Beach West Rotary Club.  He served on the Rotary District Youth Exchange Committee and was a founding member of Rotary Youth Exchange Florida.  Bill served as District Governor for northeast Florida Rotary Clubs (District 6970) from 2008 – 2009 and now serves in leadership roles for Rotary in the southeastern US and Caribbean.

In addition to Rotary, Bill serves on the board of Halifax Health – Hospice of Volusia/Flagler and Community Based Care of Volusia/Flagler (foster care).  He has served on several other community boards and task forces and is also a graduate of Leadership Daytona.

Bill received his Bachelor of Science degree from St. Lawrence University in upstate New York and his masters in hospital administration from Ohio State University.  He also served in the U.S. Air Force from 1974-78.