Halifax Health is the Official Healthcare Provider of the Daytona Tortugas, a Minor League Affiliate of the Cincinnati Reds.

Bethune-CookmanUniversity is a member of the Mid-Eastern Athletic Conference (MEAC) and is an NCAA Division I FCS program.  The school sponsors football, basketball, baseball/softball, cross country, track, volleyball, bowling, and golf annually with Halifax Sports Medicine Fellowship managing the care of >500 athletes.   The school’s marching band, known as The Pride of the Wildcats, has over 300 members and is a fixture in the HBCU band culture, culminating its season in the Battle of the Bands held before the Florida Classic – an annual rivalry football game held between Bethune-Cookman University and Florida A&M University at Camping World Stadium in Orlando. 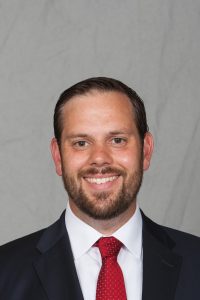 He came to Bethune-Cookman from LincolnUniversity in Jefferson City, Missouri. He spent three years with the Blue Tigers program, serving as director of sports medicine, serving in that capacity from June 2011 until May 2014.

Prior to his time at LincolnUniversity, Armstrong worked professional football, including a stop in nearby Orlando with the Florida Tuskers of the United Football League (UFL). He also worked in the National Football League (NFL) on training staffs for the Washington Redskins (2009-2010) and Tennessee Titans (2007-08 training camps and preseasons), in addition to the Austin Wranglers of the Arena Football League (2005-2006).

Armstrong’s first stop in collegiate athletic training was at North Carolina State University, where he was an athletic trainer from August 2006 through May 2009. He was the assigned as the trainer for the Wolfpack wrestling, women’s gymnastics and both men’s and women’s soccer teams.

Armstrong earned his Bachelor’s of Science in Athletic Training from Texas State University, and hold a Master’s of Education in Health and Human Performance from the University of Houston.  Additionally, he will complete his Juris Doctorate at Florida A&M University in December 2020.

Embry-Riddle Aeronautical University is the largest accredited university system specializing in aviation and aerospace in the US.  It was founded in 1926 as the Embry-Riddle School of Aviation and has grown into an NCAA Division II program participating in the Sunshine State Conference.  Embry-Riddle fields teams in lacrosse, baseball/softball, basketball, volleyball, cross country, track and field, soccer, tennis, and golf.   Halifax Sports Medicine Fellowship manages >450 athletes every year with Embry-Riddle Athletics.

Justin White is now in his 22nd season with ERAU Athletics. After graduating from the University of Florida in 1998, White interned with the University of Houston and the New York Jets. He joined the Embry-Riddle Sports Medicine staff as an intern in 1999 and was named an Assistant Athletic Trainer a year later. In 2002, he took over as the Director of Sports Medicine and has since brought a number of enhancements that have directly impacted the success of Embry-Riddle Athletics, overseeing a Sports Medicine Department that places an emphasis on injury, prevention, injury evaluation, treatment and injury/health education. Under his direction, the sports medicine staff has grown to four full time athletic trainers and two interns to serve ERAU’s 21 intercollegiate sports.

White received a bachelor’s degree in Exercise Sport Science from the University of Florida and earned a master’s degree in Sports Science from the United States Sports Academy in 2011. He is a Certified Strength and Conditioning Specialist and is a member of the National Athletic Trainers Association and the National Strength and Conditioning Association.

Trevor has been at Daytona State College since 2009 and is entering his 3rd year as Head Athletic Trainer. He and is responsible for the prevention, treatment, and rehabilitation of injuries to DSC athletes of 10 intercollegiate athletic teams and approximately 200 student-athletes. Prior to assuming his current role, Trevor worked as the assistant athletic trainer working with the Men’s and Women’s Basketball teams and as well as the Baseball and Softball teams.

Since arriving at DSC, Trevor has also served as a professor at Daytona State College teaching Introduction to Athletic Training, Prevention of Athletic Training Injuries and Illnesses, Fitness Assessment and Improvement, Responding to Emergencies, and Personal Health and Wellness.

Trevor is an Ohio native who completed his undergraduate degree at Heidelberg University (OH) in 2002. From Heidelberg, Burns went to the University of Florida and finished with a master’s degree in 2004. A member of the National Athletic Trainer’s Association, Burns currently resides in Port Orange.

The Tortugas play at Jackie Robinson Ballpark, an historic baseball park and home to the professional debut of Jackie Robinson.  Halifax Sports Medicine has provided home game medical coverage to the Daytona Tortugas since 2015, and the fellowship also travels to Goodyear, Arizona to assist with incoming player physical exams at the Cincinnati Reds Training Complex prior to Spring Training.