At Halifax Health our physicians are leaders in their fields with the most advanced medical technology at their fingertips and working alongside a highly skilled nursing and professional staff.

What is an Acute Spinal Cord Injury?

Your spine is made of many bones called vertebrae. Your spinal cord runs downward through a canal in the center of these bones. The spinal cord is a bundle of nerves that carries messages between the brain and the rest of the body for movement and sensation.

Acute spinal cord injury (SCI) is a traumatic injury that bruises, partially or completely tears the spinal cord. SCI is a common cause of permanent disability and death in children and adults.

What is a Brain Tumor?

A brain tumor is an abnormal growth of tissue in the brain. 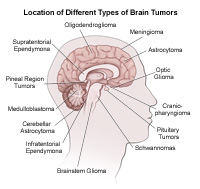 There are 2 types of primary brain tumors:

Primary brain tumors are named by the type of brain tissue where they’re found. The most common type of primary brain tumor is a glioma. This type begins in the supportive (glial) tissue of the brain. Some gliomas tend to grow slowly. Others grow and spread quickly. Some types of glioma include:

Other types of primary tumors include:

What is a Cerebral Abscess?

A cerebral abscess is a pus-filled pocket of infected material in your brain. It is sometimes called a brain abscess.

An abscess can cause your brain to swell, putting harmful pressure on brain tissue. An abscess can also keep blood from flowing to parts of your brain. If you develop this problem, you will need emergency treatment.

What causes a cerebral abscess?

A cerebral abscess usually occurs when bacteria or fungi make their way into your brain, either through your bloodstream or from an infected area in your head, such as your ears or sinuses. An injury to your head or head surgery can also let in germs that can cause an abscess.

What is Arteriovenous Malformations

Arteriovenous malformations (AVMs) happen when a group of blood vessels in your body forms incorrectly. In these malformations, arteries and veins are unusually tangled. This usually happens during development before birth or shortly after.

Most people with AVMs have no initial symptoms or problems. Instead, the AVMs are often discovered when healthcare providers treat another unrelated health concern. Sometimes the rupture of one of the blood vessels in an AVM will bring the issue to medical attention. Sometimes they are only found after death, during an autopsy.

What is a Herniated Disk?

The vertebral column, or backbone, is made up of 33 vertebrae that are separated by spongy disks. The spine is divided into 4 areas:

The lumbar spine consists of 5 bony segments in the lower back area, which is where lumbar disk disease occurs.

What is a Chiari Malformation?

A Chiari malformation is a problem in which a part of the brain (the cerebellum) at the back of the skull bulges through a normal opening in the skull where it joins the spinal canal. This puts pressure on parts of the brain and spinal cord, and can cause mild to severe symptoms. In most cases, the problem is present at birth (congenital).

There are several types of Chiari malformations, but type I is the most common. In type I, the cerebellum bulges through the normal opening at the base of the skull. This type is most often congenital. It is also called primary Chiari malformation type I. But it is often not found until a person is a teen or young adult.

In rare cases, this type may also develop later in life. This is known as acquired or secondary Chiari malformation type I.

A craniopharyngioma is a benign tumor that is found near the pituitary gland. The pituitary gland is under the brain but directly connected to it. It controls the production of many hormones in the body.

A craniopharyngioma is usually a mixture of both solid tissue and fluid-filled cysts. The tumor is not cancer. It does not spread to other parts of the body. But as it grows, it may press on parts of the brain and nearby tissue. This affects hormones, vision, and other normal functions. For this reason, it needs to be treated. This kind of tumor is most often found in boys and girls 5 to 14 years old.

What is Cubital Tunnel Syndrome?

Cubital tunnel syndrome happens when the ulnar nerve, which passes through the cubital tunnel (a tunnel of muscle, ligament, and bone) on the inside of the elbow, is injured and becomes inflamed, swollen, and irritated. 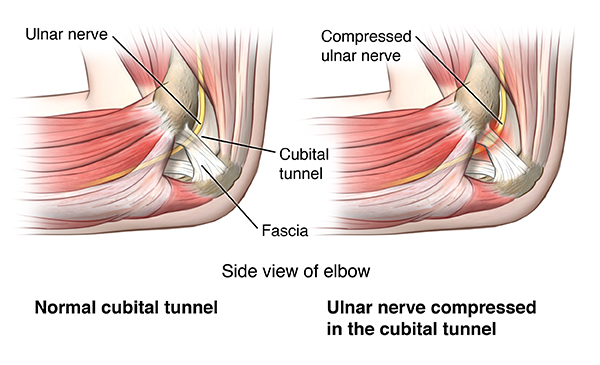 What is a Hemifacial Spasm?

What is Normal Pressure Hydrocephalus?

The brain has chambers called ventricles that normally contain fluid. This fluid is called cerebrospinal fluid (CSF). It cushions the brain and spinal cord. Normally your body makes just enough CSF each day and absorbs that same amount. Sometimes, however, too much fluid can build up in the ventricles. This can lead to a normal pressure hydrocephalus (NPH).

A normal spine, when viewed from behind appears straight. However, a spine affected by kyphosis has a forward curvature of the back bones (vertebrae) in the upper back area, giving an abnormally rounded or “humpback” appearance.

Kyphosis is defined as a curvature of the spine measuring 50 degrees or greater on an X-ray. The normal spine can bend from 20 to 45 degrees of curvature in the upper back area. Kyphosis is a type of spinal deformity.

What are Metastatic Brain Tumors?

In adults, metastatic brain tumors are more common than tumors that begin in the brain. They are also treated differently from those that start in the brain.

Cancer may spread to the brain through your lymph system or your bloodstream. Or it may travel to the brain from a nearby tissue. Metastatic brain tumors are becoming more common because people are living longer after having cancer somewhere else in their body.
In most cases, the metastatic brain tumor is found in the cerebrum. This is the outer part of the brain that controls your thoughts, emotions, and language ability. It also is involved in movement and sensing the outside world. But metastasis can appear in other areas of the brain, too.
Metastatic brain tumors happen most often in lung cancer. But these tumors can occur in many other types of cancer, such as melanoma or breast cancer.

What are Rathke Cleft Cysts?

Rathke cleft cysts (RCCs) are benign (non-cancerous) fluid-filled growths that develop between the parts of the pituitary gland at the base of the brain. They are congenital deformities, meaning that they develop while a fetus is growing in the womb. An RCC develops from a piece of the fetus’ developing Rathke pouch, which ultimately becomes part of the pituitary gland.

Rathke cleft cysts are rare. And, they rarely cause symptoms or problems during childhood, so they are not usually diagnosed in kids. Rather, they are most often found in adults during an MRI scan to diagnose another problem, or even after death, if an autopsy is done. Women are more likely to develop this condition compared to men.

If Rathke cleft cysts become large enough, they can cause vision changes or various problems with the pituitary gland’s normal processes.

What are Spinal Cord Tumors?

A tumor forms when an abnormal cell grows to form a mass of abnormal cells. Spinal cord tumors are tumors that form in the spinal cord or in the area around it.

A spinal cord tumor may be cancer (malignant) or noncancer (benign). A benign tumor can often cause pain and discomfort because it pushes on the spinal cord or nerves.

Spinal cord tumors are sometimes caused by a genetic disorder, such as neurofibromatosis.

A normal spine, when viewed from behind, appears straight. However, a spine affected by scoliosis shows a side-to-side curvature, with the spine looking like an “S” or “C.” The back bones (vertebrae) may also be rotated. This makes it look like the person is leaning to one side. Scoliosis is defined as a curvature of the spine measuring 10° or greater.

Scoliosis is not due to poor posture.

Spinal curvature from scoliosis may occur on the right, left or both sides of the spine. Both the thoracic (mid) and lumbar (lower) spine may be affected by scoliosis.

What is a traumatic brain injury?

A traumatic brain injury (TBI) is a type of brain injury caused by a blow or jolt to, or penetration of the head. A TBI can occur during a car accident, from being tackled during a football game, or from a combat-related wound. 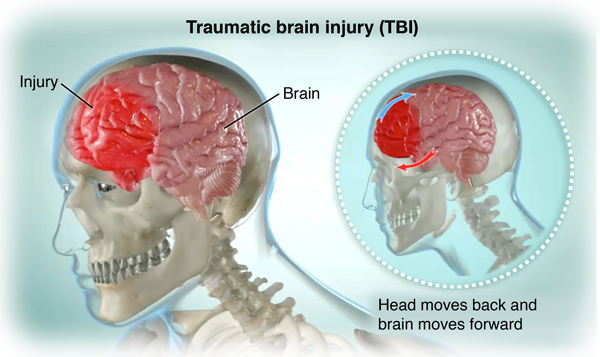 After a TBI, nerve cells in the brain may be damaged. The neurons may have trouble doing their job of carrying signals to different parts of the brain. If you have a brain injury, you could have trouble thinking or moving normally. Your brain may also have trouble keeping your body working properly.
Most cases of brain injury that occur each year are mild. A concussion is a minor form of brain injury. But, many TBIs can be severe. Severe brain injuries require emergency care. People with severe injuries may require a lengthy recovery period, and their symptoms can linger for a long time.

Trigeminal neuralgia is a type of nerve pain that affects your face. You may feel a strong burst of pain in part of your face. It is usually on one side of the jaw or cheek. The pain may be burning or sharp, and so severe that you can’t eat or drink.

A flare-up begins with tingling or numbness in the area. Then pain starts to come and go, often in bursts that last anywhere from a few seconds to 2 minutes. During a flare of the condition, these bursts of pain may become more and more frequent until the pain almost never stops. The intensity of the pain can make it hard to get through your day. But it’s not life-threatening.

This chronic pain condition can flare up for a few weeks or months. Then the pain goes away for a while, sometimes years.